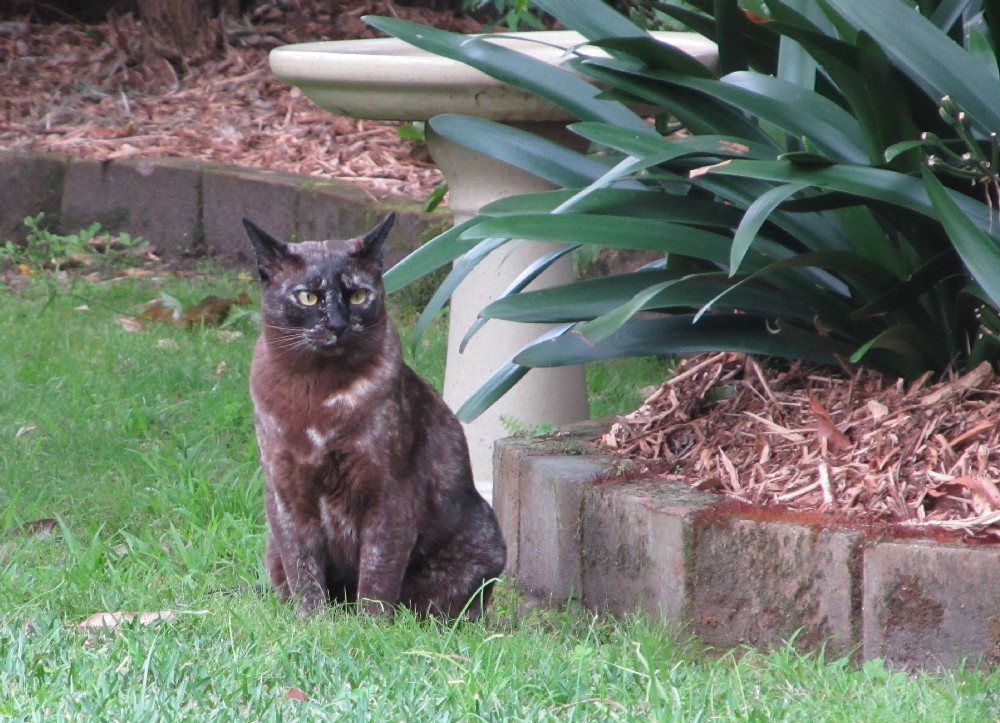 A typical Brown Tortie Burmese, always looking for mischief - when not asleep. Like her sister is also loving and affectionate, except to Indi who she does not like for some reason, we think jealousy.

Tali loves chasing insects and on occasions when she has been out in the back yard was adept at scaling the back fence and visiting the neighbours. We have solved the escaping problem by netting the entire backyard fenceline.......at great expense, however, it is much better now we can all enjoy our yard - the cats all agree.

We do get worried when we see this look (photo) as we know it means we are planning something. 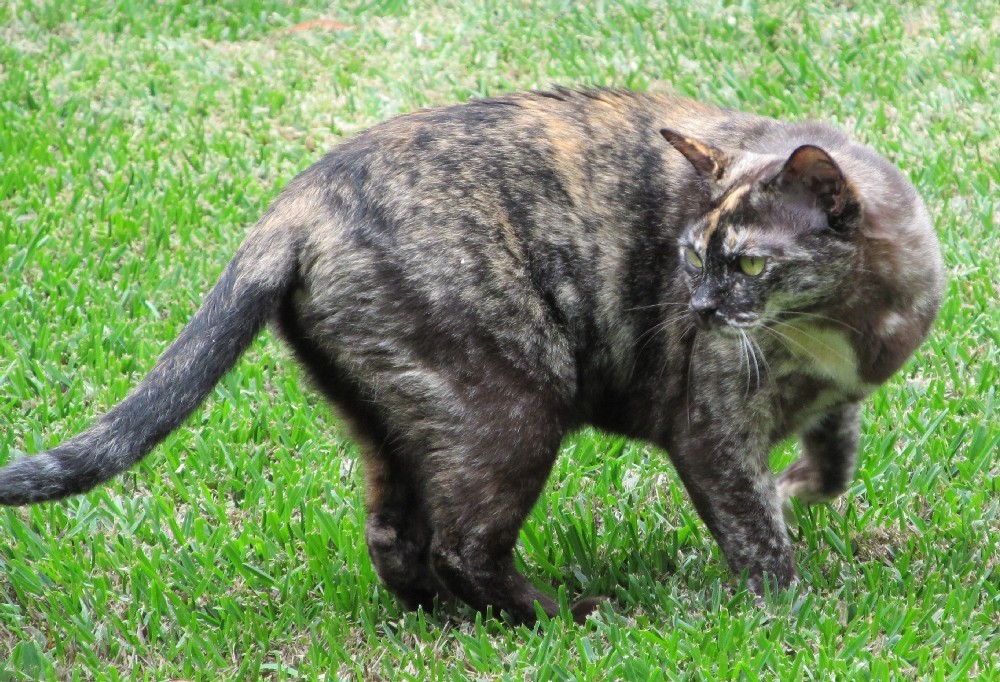 Another typical Brown Tortie Burmese. KAMI is short for Kamikaze, and that says it all. Litter sister to Tali.She was originally purchased as 'an afterthought' and what a joy she is.

Again loving and affectionate, chases insects and participates in wrestles with either of the other two Burmese, however, is terrified of Kati who bullies her,  she spends a lot of time up high to avoid Kati.

Kami has taken to meowing around our room at night, I think she believes we should all be up playing with her. 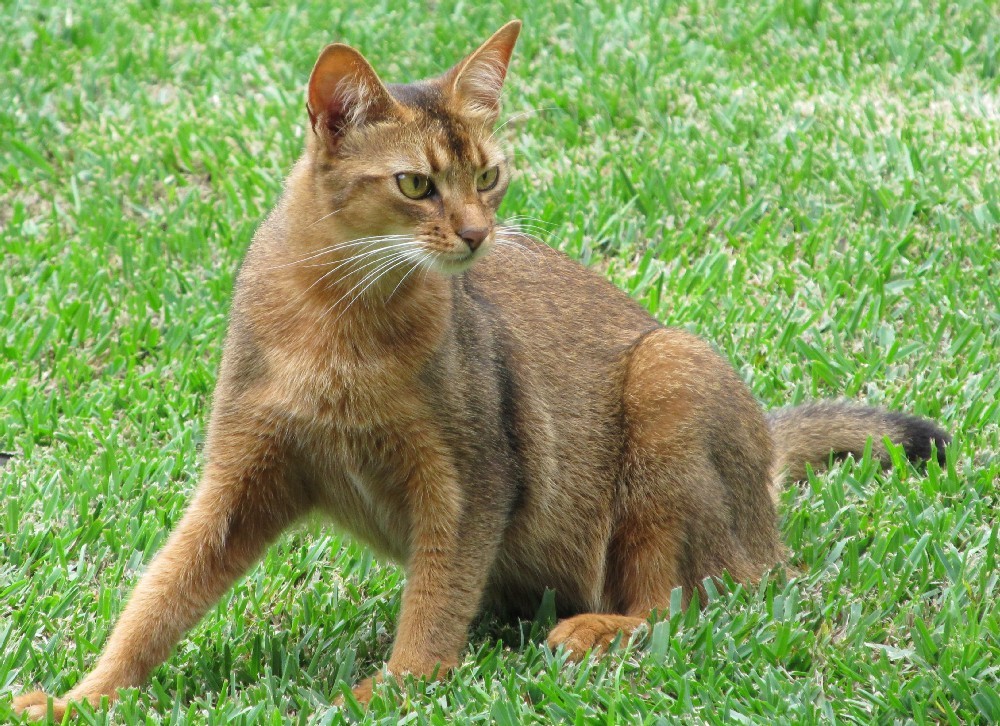 As the only non-Burmese in the house Kati could be termed the black sheep', except she doesn't know she is any different to the others. Kati will play/wrestle with whoever is available and willing, unfortunately she is a bit rough for the Burmese and they run away fairly quickly from this game, but has a real 'soul-mate' in Indi and they are forever playing chasings through the house. Kati has not really been accepted by Tali or Kami.

Kati is apparently, a typical Abby, hyperactive and non-stop activity. She is also a portable eating machine and would eat 24/7 given the opportunity.  Notwithstanding her eating habits, Kati is 'lean and mean' and shows no obvious effects of her eating. When she slows down from a full gallop, Kati is extremely affectionate and really loves a bit of a petting - she is not really a 'lap cat' as that requires remaining still for a period of time and she doesn't know the meaning of being still. 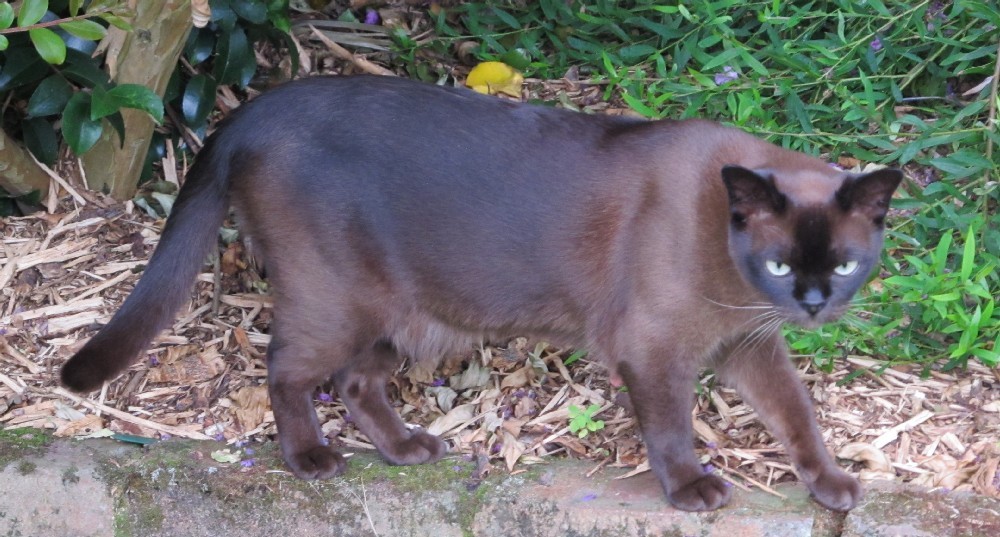 Indi is an absolute charmer, but full of mischief and fun. Whilst Indi is on the small size in comparison the the other Burmese. Indi gets on very well with Kati as they are of fairly comparable ages and they are constantly playing together and their games of chasings are something to behold.  When Kati gets to rough Indi growls and hides.

Indi is 'very good on the tooth' and will eat anything in sight or in a eating bowl - needless to say she is overweight (tubby) for a Burmese, however, this does not slow her down in any way, nor affect her affectionate nature. She is a typical Burmese and will sleep on your lap when tired enough, or cuddle up in bed. Indi has decided her sleeping arrangements at night are between Peter & I with head on pillow.

In summary she is an utter delight.

All our cats have a great life with a fully enclosed cat run, which was originally and still is the fernery,   It runs the entire side of the house and is open at 2 doors and a cat door - chases are great fun - in one door around and out the other - just don't get in the way! They also have ramps and platforms to run up and climb.  The cat run was apparently not enough for our cats and has now been extended to include the whole backyard with the fenceline all netted.  not a bad life at all.